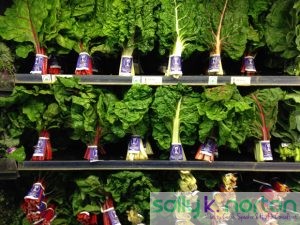 I used to eat this stuff as a normal and healthy thing to do. Swiss chard and I go way back, ever since my mother told me to plant it in my first garden when I was 10 years old. It germinates easily and it isn’t bothered much by pests. The large leaves are easy to harvest and the plant looks great in the garden. And, most important to my mother, it is a cut-and-come-again plant that yields a continual and bountiful crop. It was good that it was so easy to grow, because grocery stores rarely carried it. All that has changed.

Mountains of Swiss Chard at the Store

Swiss chard has grown popular—very popular, if the amount of refrigerated space allotted to it in our local organic supermarket is an indicator. I was there last week on a hopeless quest for mustard greens. I asked the young man restocking the produce case if they had mustard greens, but like the other stores in town, he said they don’t carry them anymore.

Then I noticed that he was unloading swiss chard—at least 40 colorful bunches, fresh out of their shipping boxes into a 4’ 4’ section devoted solely to swiss chard. The greens looked marvelous, but I could only sigh and worry. In my astonishment at the amount of store space devoted just to swiss chard, I commented on it as he piled it up. He said that they sell a “crazy amount of it”, but he’s never tried it.

Doctors and researchers assume you only consume about 120 mg of oxalate per day! 120 mg is about the amount of oxalate in just one ounce of almonds. But, a ½ cup of swiss chard has 4 to 7 times that amount – far in excess of what is considered “typical” and “tolerable” on a routine basis. That half cup of spinach has about 6 times the daily expectation. Oxalates have enormous health consequences: If you happen to like nuts and swiss chard, spinach, or beet greens you could be heading for physical pain, poor sleep, or kidney stones.

Until 2009, I paid no attention oxalates in my foods. I did not know or care that I routinely ate foods loaded with oxalate. I never connected my weird symptoms of nightly hiccups, belching, restless legs, and poor sleep to my diet. Why would I suspect my diet? I was eating fresh, whole, healthy foods—all the time, every day. I served swiss chard about twice a week and sweet potatoes at least five days a week, believing they were good for me. My diet could not be blamed for my health problems.

So later, I was shocked when I accidentally cured my sleep problem by eliminating high oxalate foods like swiss chard (including my beloved sweet potatoes). I learned that oxalates are neurotoxic. That is, they bother the nerves and brain. I also learned from reading medical articles that hiccups are a sign of this neurotoxicity (which covers a spectrum of symptoms including hiccups, convulsions, and death).  (Here are a few of those articles: Neto 1998; Chen, Chou et al 2002; Chang, Hwang, et al 2000). There must be a reason the bugs don’t mess with the swiss chard in the garden—it may be too toxic for them, too!

The Danger of Innocence

My ignorance about the oxalate content of foods and about the toxic potential of oxalate in foods left me at risk for self-inflicted poisoning. That turned out badly for me, and for my husband. As a last resort, I corrected this dietary mistake and was surprised at the results as we each recovered effortlessly from chronic health conditions.

Anyone can get into trouble from overdoing the high oxalate foods. This is especially relevant now when high-oxalate foods are growing in popularity and are available year round.  The produce aisle has become a loaded gun, and we are the innocent kids who have no idea about the dangers lurking there.

If you want to avoid accidental harm from oxalate, drop the swiss chard, beet greens, and spinach. And tell the produce manager you would buy mustard greens (6 mg oxalate per ½ cup steamed) and other low-oxalate produce, if only they would stock them.

Indeed, there are other good options for cooked greens. For example:

What mustard greens and romaine lettuce lack in hipness and glamor, they make up for by letting you sleep at night!